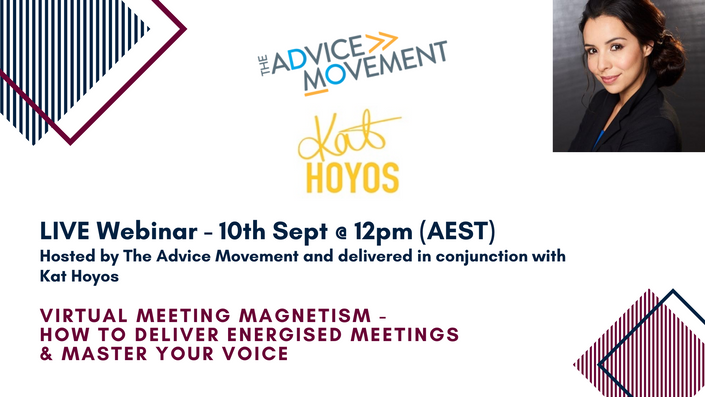 How to deliver energised meetings & master your voice

The coupon code you entered is expired or invalid, but the course is still available!

This is a recording of the Webinar that Kat Hoyos delivered on behalf of The Advice Movement on the 10th of September, 2020. Below is just some of what we covered in the Webinar:

After months of delivering virtual meetings, you might be starting to get a bit of vocal or virtual meeting fatigue - and if that sounds like you.. then this webinar for our AM Family is just the tonic you need!

In this week's webinar Kat Hoyos will guide our AM Family through ways to deliver consistently energised virtual meetings without causing virtual burnout or vocal fatigue.

Specifically in this webinar Kat will help you understand how to:

Kat uses her years of training and experience as an actor in film and television to share simple tips every single AM Family member with a webcam and a voice can incorporate TODAY.

>>> This session WILL be interactive... so bring your biggest smile, warm your voice up, sit up straight, take a deep breath and join us for an awesome session that will take your Virtual Meeting game to a whole new level of energy and vocal awesomeness <<<

Oh yeah... you'll need a straw, a quarter filled cup of water and for some of our lucky volunteers... your Webcam, Microphone and a willingness to get some LIVE coaching from Kat!!

*** This session is not about CPD... and let's be honest... if you watch all our AM webinars you'll have enough of that already *** 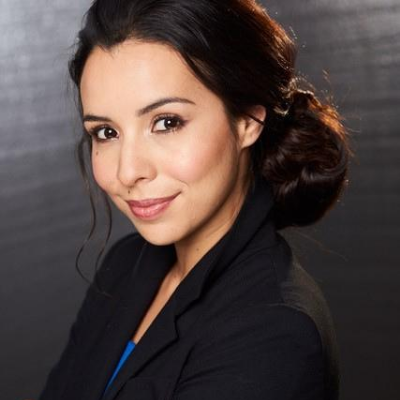 Named one of the Next Gen Women of Film and TV by TVWeek, Kat has been placed in the spotlight through playing Layla Habib in Channel 9’s comedy Here Come the Habibs. Kat for “Best New Talent” and “Most Popular Actress”. Her latest film Chasing Comets made its premiere nationwide and has been seen on Channel 10 and Stan.

A singer and dancer, Kat has toured Australia wide with Hairspray the musical. She was in the Australian and NZ tour of Jersey Boys, and performed at the Hayes theatre with the musical Xanadu. Kat has performed as a featured vocalist at the Channel 9 Carols by Candlelight.

Through her coaching, Kat has innovatively merged the connection between drawing from performance techniques through the creative arts and utilising it through communication and body language in the corporate sector. She has taught at major performing arts schools in Australia, lectured at the University of Wollongong and has taught at Australia’s leading acting school, NIDA.

Virtual Meeting Magnetism
Available in days
days after you enroll

When does the Webinar start and finish?
The Webinar starts now and never ends! It is a completely self-paced online module - you decide when you start and when you finish.
How long do I have access to the Webinar?
How does lifetime access sound? After enrolling, you have unlimited access to this Webinar for as long as you like - across any and all devices you own.
Will I get CPD points for this Webinar?
*** This session is not about CPD... and let's be honest... if you watch all our AM webinars you'll have enough of that already ***
off original price!

The coupon code you entered is expired or invalid, but the course is still available!

If you liked this Webinar be sure to check out and 'enrol' in any of our other Free Webinars as well.